Hey guys, this post is a summary of what happened in Bali which happened during Oct
I was too lazy to write in full ( and my English is bad ).
17th ( Flight Day )
Wore an ordinary cartoon tee with denim shorts.
CY wore a simple white spaghetti strap, denim shorts and a cardigan.
Both of us brought the 'Xav' and 'Kelvin', and we were kind of embarrassed and scared when it was inspected by security at the entrance via the X-ray machine, and I'm not sure if the guard did see it.
After we have taken off, we manage to silently insert the toy. The game was to resist the feeling for each level, and each level lasted for 5 mins before we levelled it up. Whoever orgasmed first will pay for the dinner.
I was in my top form that day and managed to put in a strenuous edging. A sad ending for CY, as she orgasmed at level 5. I was holding strong but ended up at level 7. It was not an intense orgasm but I could feel the coldness from my panties. We were lucky as the person who sat together with us was asleep.
We removed it before going through the arrival hall, and we didn't play when en route as we were focused on the data issue.
We arrived at the hotel in Seminyak, which was already 8pm.

After checking in, we were given a room with a balcony directly towards the pool.
After settling down, we did a quick cleanup before going for dinner.
I was planning to do some walking nearby, but due to the hotel we stayed in, there weren't many shops except for their Minimarts. So we went back hotel after buying some liquor.

After an hour-long of showering, we changed into the shower robe, which was provided by the hotel and lepak on the balcony
We talked a lot of nonsense while drinking. We enjoyed ourselves until a "pervert" kept peeking at us from level 2.
Both got timid and went back in. I even checked all the locks before closing the curtain.
CY was exhausted and fell asleep immediately.
While I was having a chat with xav. He acted like he missed me a lot.
It was around 2am when we decided to end the call as he had to work in the morning.
That moment, all the way to the morning, I was trying to understand why, how or what, but I was unable to sleep despite drinking alcohol.
I did consider jilling myself off, but CY and I had a promise.
In the end, Netflix accompanied me until morning.

18th ( 2nd Day )
Woke up by the alarm at 9 as we planned for early breakfast and maybe a short swim
After freshening up and putting on simple clothing, we went to the cafeteria for their buffet breakfast.
It wasn't in our plan to be the attention at the breakfast area, but we are like celebrities due to our clothing. No matter where we go, there will be eyes on us.
For myself,  I wore a pair of Navy FBT shorts with a Blue Nike sports bra. I was not planning to showcase anything, but I just got limited clothing choices.
Cy wore a black spaghetti strap with the same cardigan and a pair of black FBT shorts. She was braless as she thought that her cardigan can cover it.
After a light breakfast ( or maybe due to the discomfort attention we caught ), we went back to our room and I went for legit swimming for 30mins before the skies turned dark again. ( Wore the same Sports bra and Fbt shorts )
We checked out at 12 and changed to another resort( our main )
After checking in, we enjoyed the room before we went around Seminyak.
We managed to do some shopping at the flea markets, and we brought some dresses and articles of clothing.

We only managed to shop for a short time before the weather went dark and it started to rain.
My long white shirt went semi-transparent when it got wet, and my normal black bra was damn obvious.
Cy too, her strap became tight-fit and translucent.
As the hotel was nearby, we returned back. The male staff at the counter looked at us for a good 10sec before providing us with towels. ( Guys are just guys )
Ends up, the rain didn't go off. We were sad at first as the weather didn't appreciate us.
We stayed in until 7pm before going off to the Spa. ( FOC )
Before the session started, we were told to remove our clothing, including our bra. The funny part was, we both decided to go braless without any planning but to realise when we were at the Spa Centre. After being ushered into the room, we were told to remove everything and lie flat on the massage table.  Immediately, I had this flashback of a P*** video I watched. The massage table was similar to the video, and I giggled. CY was puzzled but laughed after I told her.
We have chosen the Balinese massage, the most popular in the Centre.
Things got awkward when I heard the conversation between the staff to CY. She needs her to remove her vibrator. I laughed and stared at CY.  Trust me, it was damn awkward, but the staff was so professional that she gave CY a piece of tissue to contain it. Luckily, she didn't have it turned on.
After the massage, we gave them a massive tip before they went off. ( To thank them and also to cover the awkwardness)
As I was half awake, plus with those massage regions, I went into my horny mode. As we were given time to wear back our clothing, I only decided to wear back my shirt. No bra, no thongs, no shorts. Luckily, the shirt was long enough, but I couldn't bend or raise my hand. Things got a bit out of hand when CY kept flipping my shirt and I nearly exposed myself in front of the couple who was walking out too.
By the time we returned to our room, it was already 9pm and the rain had stopped. We changed into our mesh bikinis(planned) before we went and ordered food from the hotel and brought it to the beach. We put on a normal tee and shorts as the Mesh bikini was revealing.
We removed our clothing after finding a good spot and had our dinner. ( thanks to the bright light from the beach club)
After sitting for a while, both of our nipples were freaking obvious ( especially mine) and with a certain angle, I could even see CY's bare pussy. I bet she does see mine too, as my mesh bikini has a larger hole.
We drank quite a lot, and as we were tipsy, plus the unvented raging hormones, I loosened my bikini top and was about to go topless. Ends up, did not go topless as there are still tourists walking around.

We immensely enjoyed the 'freedom' and exposure but were disturbed by two Ang Mohs who seemed drunk and walking towards us.
Ends up, we panicked and grabbed everything and went off. I had to keep holding on to my chest to prevent the bikini from dropping.
Ends up I wore back my tee without tying my bikini. ( No one cares )

I did vent out my raging hormone when we were showering (the same goes for CY ), and I was determined to continue on the bed but ended up dead.


19th day ( Ubud )
The next day got worst at the start. We woke up late and missed breakfast as our driver had already arrived. Our plans for breakfast were gone as we couldn't afford to delay the timing.
Our outfit was simple, sundress + bra + Thongs.
Because we predicted there would be many tourists, we decided not to wear clothes that showed too much.
The day was fun and rewarding ( in terms of knowledge and gifts )
We were able to get back to our hotel before 8pm after touring and shopping all day.
Before we alighted, we decided to give our driver/tour guide 'something nice' because he was such a sweet guy. He went beyond what a tour guide will do. He followed us throughout the journey, including those sites that required him to pay. I mean, he has every right not to.

As the price for the tour had already been set ( and both of us kind of spent most of our money), we added two new "items" as a way to show our thanks.
We gave him our thongs. Yes, both of our thongs ( which were removed freshly in his car before we arrived back )

CY was the one who gave him the envelope and although we both think that it looks kind of suspicious, he took it without checking. I am not sure when he will check it but I hope that, with the two clothes, we can help him relieve himself that night. ( I kind of spotted him, looking at CY's ass and breast area )
We went back to our room for a quick washup, before visiting a nearby restaurant for dinner. We even visited the famous Potato beach club for a drink. After a few cups of drinks, we were tipsy and decided to return to our room.
The night doesn't end there.
After a long, streamy bath ( the hotel has a bathtub ), we changed into our planned pyjamas. In fact, it was an impromptu challenge by Isabel.
We were given a task which required us to wear just a single piece of clothing and expose ourselves to nature. ( I bet you guys can imagine what we had done )
TBH, I am not sure what was wrong with me( I was more daring than ever), but I wore back the white shirt I wore on the 2nd day (it was still kind of wet ). Best of all, I went further by unbuttoning the first 2 buttons. Like what CY said, why not I just get fully naked since she can see my areola and mini triangle pubic hair.
For CY, she used the towel to cover herself. It wasn't a bad idea until her Menses came. ( A bit random but we did predict)
We were having fun as our balcony faced the beach area, and thanks to guan yin ma, we were at the second level, which meant no one would know no matter how we exposed ourselves. Tbh, it was a different type of excitement from what I had done in the past. There was no fear at all even though I spread my legs widely for one to two hours. We even went naughtier by using 'Xav' and 'Kelvin' while video calling Isabel. She was impressed with us.
If I did my math correctly, I had four intense convulsions before I died. CY survived more than six times before she brought me back into the room. ( I was 0.01% awake then)
20th ( Home )
The next day was average as we did go for breakfast but a quick one as we had to check out early due to the flight timing. In the end, it was delayed one hour.
Once again, we were the centre of attention in the waiting area, as we wore bralette and regular shorts. However, we covered it with a shirt but did not button it.
After boarding the flight, I was a dead log throughout the flight, per what CY said.
Disclaimer :
- CY's toy: Kelvin (Someone who has been chasing CY )
- mine: Xav
Named after our partner 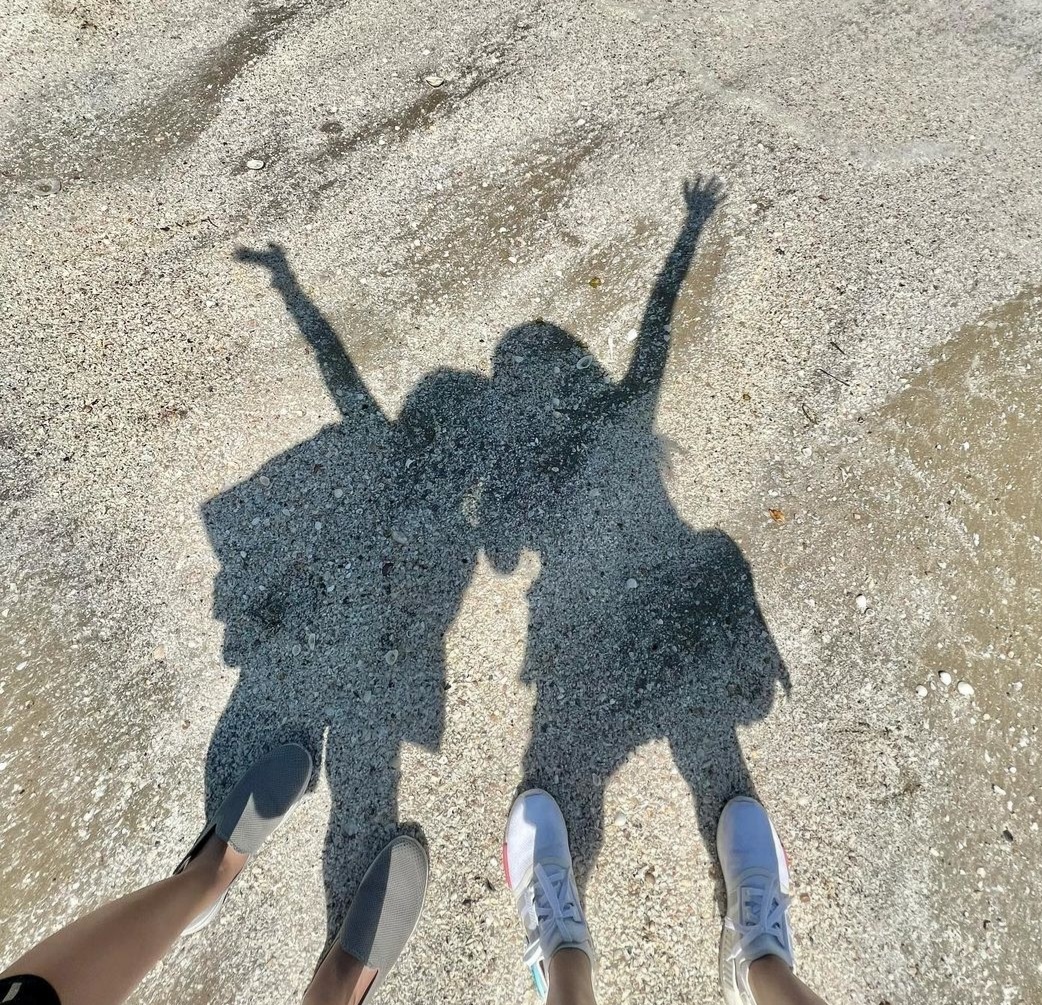 A rare photos of us.